The City's Ethics Commission often receives the same or similar inquiries regarding campaign finance. The following is intended for informational purposes only and does not constitute advice. Each candidate is responsible for meeting proper reporting requirements.

For all campaign finance questions, we recommend reviewing Chapters 8 and 10 of the City Code and/or consulting with an accountant or legal advisor if you have more concerns regarding these issues.

I’ve set up an account with an online-only bank. I have thus far only received donations via check, debit and credit card. However, in the event I receive a cash donation, can I use the cash to pay for campaign related expenses if I report it on a campaign expenditure report?

For your cash contributions, you would report them as such. The contribution would follow the same reporting procedure on the Campaign Contributions Report, and under “type” you would specify “cash.” The other piece of this would be to report the purchases made with cash in your Campaign Expenditures Report accompanied with the expense purpose and the receipt.

I have received contributions through PayPal, which deducts a small percentage of each as a service charge. I can track the contributions and service charges through the PayPal website, and have included that in my expenditure report, but cannot seem to get any form of a receipt or measure of total fees from PayPal. Should I include these fees in my expenditure report and not include a receipt in my filing information?

You mentioned PayPal, what about other e-payment systems?

Yes, you can accept allowable contributions via Square, Venmo, Cash App, or most other mobile/electronic payment systems. However, because city elections are non-partisan, you cannot use partisan campaign fundraising tools, such as ActBlue, WinRed, or Crowdpac. Also, check the tool's terms of service; some, such as IndieGoGo, do not allow their platform to be used for political campaigns.

As with other contributions, anonymous donations cannot be accepted. You must be able to report the name of the contributor and their complete (street, city, ZIP Code) address. This may require seeking additional information from donors who use an e-payment tool.

You also must report the full amount contributed as a contribution and all expenses related to the contribution as an expense. Please be sure the tool used can provide an accounting of the fees charged that can be used to document the expense.

Can I loan money to my own campaign, for example, seed money for expenses prior to raising contributions?

Candidates (and their spouses) are allowed to contribute and to make loans to their own campaigns. Both must be accounted for on the campaign finance report. If the candidate is contributing the money to the campaign, it should be reported on Schedule A of the campaign finance workbook. If the candidate loans personal funds to their campaign, with the expectation that the money will be paid back from excess contributions, then it should be recorded as a loan on Schedule E.

Self-loans do not require the same documentation as other campaign loans, nor do they accrue interest; however, they must be repaid, or the candidate must provide a signed statement forgiving all or a portion of the loan.

Self-loans and self-contributions by a candidate or their spouse are not subject to contribution limits (City Code Chapter 8 §8-31(B)); however, they do count towards the total amount raised by a candidate and are counted towards the $1,000 threshold for appointing a campaign treasurer and opening a separate campaign bank account (City Code Chapter 8 §8-24(A) and §8-30). Per §8-31(B)(2), contributions of a candidate or candidate's spouse or domestic partner may be aggregated under one line or total, to ease the reporting process.

For example, Jane Smith lends her campaign $300 in April. She receives another $1,300 in contributions during the campaign and spends a total of $1,500 by the end of the election, leaving a surplus of $100 in her campaign account. In closing out her account, Smith can pay off $100 of the self-loan with that surplus balance, but must provide a statement forgiving the remaining $200 of the self-loan. If Smith had raised $1,800, she could repay herself the full $300 self-loan, but must dispose of the remainder of the surplus funds per City Code Chapter 8 §8-31(E).

If multiple self-contributions or self-loans are made to a campaign by a candidate or their spouse, they can be reported as a single aggregate number on Schedule A or Schedule E, as appropriate, instead of as individual contributions/loans (City Code Chapter 8 §8-31(B)(2)).

If I used a personal credit card for campaign purchases, how is the expenditure recorded?

Ideally a check or debit card associated with the campaign account would be use for campaign expenditures. If a personal credit card is used for expenses, it is permissible to use campaign funds to cover the expense of the items purchased, but not interest incurred, if any. However, the expense should be recorded as the vendor being paid, not the credit card issuer.

For example, John Doe orders campaign T-shirts from an online store and pays for it with his personal Visa card. The expense should be recorded as Online T-Shirt Shoppe with the vendor’s address and the amount paid. A receipt or invoice for the purchase must also be submitted with the report. Campaign funds may then be used to pay the expense incurred.

Can a legal permanent resident donate to my campaign? 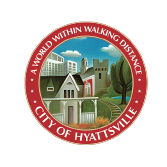